Scott Sigerfoos Posted on May 23, 2018 Posted in Uncategorized No Comments

Written by Lola Beasley at the Bremen Enquirer

At 1:30 p.m., the student population in grades eight through 12 filed into Bowen auditorium, completely unaware of what was awaiting. As they sat brimming with curiosity, a video was projected onto the screen on stage. The faces in the video were familiar, as they were the faces of fellow classmates who were preparing to venture out for some mid-day fun. Four girls then entered a vehicle, with only the driver securing her safety belt. As the car begins to navigate the streets of Bremen, a dash cam and drone records the girls’ movements and conversation.

The video feed ends, but the student viewers could hear the 9-1-1 call placed by Leeper, in which she frantically told the dispatcher that she had been in an accident on Grant Street in front of the high school, and that one passenger had been ejected from the vehicle she had been driving.

At that moment, students were then dismissed outside the auditorium, where a gruesome, and graphic car accident scene was awaiting outside on the lawn of the high school.
Students caught sight of the driver, Leeper, pacing frantically on the lawn, and as screams of panic filled the air, their attention was drawn to the two accident victims inside Leeper’s vehicle, and the body of the passenger, played by BHS Junior Sarah Schweisberger, covered in blood, and laying lifeless near the rear of Kauffman’s vehicle. It was a very poignant scene, one that BHS Principal Bruce Jennings hopes resonates with the students the rest of their lives. “I was very pleased with the respectful and mature response from the audience of students,” said Jennings. “They were very attentive throughout the entire 80-minute event. We are blessed to have great students at Bremen High School; yet, sometimes even well-behaved kids make a poor decision that can impact the rest of their lives and the lives of the people who love them,” he continued. “My hope is that this vivid educational experience will proactively raise our teenagers’ level of awareness regarding avoiding and preventing distracted driving practices. My hope is that we can prevent a tragedy, and that all of our school family members will be able to enjoy a long and healthy life by practicing good habits and making good decisions. More importantly, I hope that they will consistently model good driving habits and behaviors for others, including the adults and young children in our community.”

Facilitated under the direction of Alicia Elder, Lutheran EMS paramedic, and with assistance from Officer Troy Ulch of the Bremen Police Department, Operation Prom continued, showing students the processes that take place after a collision. Students witnessed the Bremen Police Department and the Bremen Fire Department arrive on scene, moving quickly into action as the driver was detained and questioned, the body of the deceased was covered with a sheet, and firemen prepared the car for the extrication of two passengers in Leeper’s vehicle.

“It was very realistic,” said Leeper. “It was scary for me to see all of my friends injured and being taken away. I hope that the students realize that it’s not a joke, and it could happen to someone, to anyone.”

After Bremen Fire removed the vehicle’s roof, front seat passenger Cori Jones was removed and taken to an awaiting Lutheran EMS stretcher. After assessment of Jone’s injuries, she was taken to a helicopter that was positioned on the high school’s football field, where she was to be transported by Lutheran AIR to an out-of-town hospital for treatment. “I hope that people actually take it seriously,” said Jones, BHS junior. “I know it wasn’t real, but it was really realistic and scary, and I hope no one else has to go through that.”

The actors and actresses involved in the mock accident remained in character in front of their peers, crying out in pain, in curiosity, and hauntingly shouting for their deceased friend, Sarah.

Next, Bremen Fire pried the doors back and began the extrication of BHS Junior Caitlyn Myers, the rear, passenger side occupant. “I’m hoping that people understand how serious and scary it is,” said Myers. “When they smashed that window and started cutting around me, that’s when it really got real. I started to panic and cry, and realized that this is actually what it would be like, and I don’t ever want to go through that again.”

Once Myer had been cut from the vehicle, and Kauffman’s injuries were assessed and judge non-threatening, attention was diverted to Schweisberger, who had been laying on the grass, appearing fatally injured. “It was really weird,” said Schweisberger of the experience of playing a deceased accident victim. “It was a lot of emotions. Nervousness. I was really sad when it came time for my own funeral, and writing my own obituary was really weird, also. It was like a roller coaster of emotions. It was very powerful to me.”

After the Marshall County Coroner had determined that Schweisberger was deceased, Mishler Funeral Home loaded her into a blue body bag, and onto a stretcher, and into the back of the awaiting hearse. From there, students re-entered Bowen auditorium where they then bore witness to the mother of Schweisberger crying over a coffin on the stage. The coffin, presumably holding the BHS junior, was a hard sight for some students. What followed was not any easier, as Brad Thornton, playing the role of the funeral director, recited a scripted service for Schweisberger. Moments later, Officer Ulch took the stage to brief the children on the law regarding distracted driving, sharing a video featuring accident survivors with life-long injuries, and to enlighten them with statistics related to accidents involving young drivers. “I look at today as a way to try to get through to them,” said Ulch. “And as a way to show them that their decisions made outside of this building can affect them greatly. If it opens their eyes event just a little bit to the dangers that wait out there, and the decision they need to make and think about, then it’s worth it.”

Officer Ulch has been with the Bremen Police Department since December of 2016, having worked as an officer with the Culver Police for eight and a half years prior, doing something similar to Operation Prom for Culver students. “Bremen High School has always had a strong partnership with the Bremen Police and Fire Departments, but Lutheran EMS has become a fantastic supporter of the school since they came to Bremen recently,” said Jennings. “Alicia Elder from Lutheran EMS should be credited with coordinating the event, and the support for the school that she has demonstrated has been extraordinary.” Elder wished to thank all those involved in the production and facilitation of Operation Prom. She credited the efforts involved in creating believable performances, and expressed gratitude for the student population’s cooperation.

“Today was really important for us at Lutheran, because we wanted the students to realize that all of their actions create reactions, and a lot of the time, they don’t think of that,” said Elder. “We wanted them to have a visual understanding, especially as they start to get ready to celebrate prom season. We really want to thank everyone for helping make this a success today.” Jennings wished to thank students involved in the planning and preparation, including Jackson Barnes, Schweisberger, Jones, Myers, Leeper and Kauffman.  “They are fantastic, and they were able to keep the mock accident event a secret until it actually happened,” said Jennings. “In addition to the many first responders, I would like to thank Jeff Hazen at Mishler’s Funeral Home, John Grolich from the Marshall County Coroner’s Officer, Eric and Brad Thornton from the Bremen Fire Department, and Troy Ulch from the Bremen Police Department for participating in this worthwhile program.”

The video of the girls in the car prior to the accident was directed by Kauffman, and filmed by Barnes and Landin Willis as they left the home of Bremen Fire Chief Matt Neher.

“Thank you to all the Bremen High School students who helped, all the faculty involved, first responders, town employees, and anyone who contributed during the mock presentation of Operation Prom,” said Neher. “With everyone’s help, it was a seamless process.” Kauffman, who is only a freshman, made a large directorial debut, constructing a story-line that would precede the accident. As the driver of the other vehicle involved, Kauffman, who was wearing his seat belt, sustained a cut to the hand, and a bruise on the cheek. “At first, I gave myself a little time to understand that what was happening wasn’t real,” said Kauffman. “As the ball started rolling, and things started to happen, it wasn’t me acting anymore. It was just me feeling and realizing that this could have actually happened to me. I’m learning how to drive right now, so this is really hitting me. They are really driving home the point to be safe while driving, and don’t text and drive, and me being able to be in a situation like that really brought the point home. I knew Sarah wasn’t really dead, but it felt like I was there and she was dead, and it was able to show me what it would really be like,” he continued. “I hope that they are able to see it and not just say that it was fake, but that they can see it as an awakening to the results of texting and driving. It isn’t important to send a text. It’s important to be alive and not to miss out on all those experiences. I hope that it doesn’t just impact kids, but also adults who may drive distracted, and that we can set an example for them, and that we may all learn from this.” 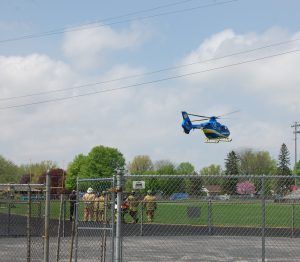 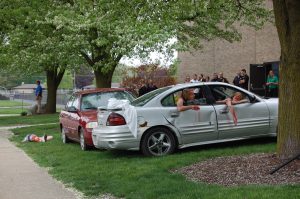 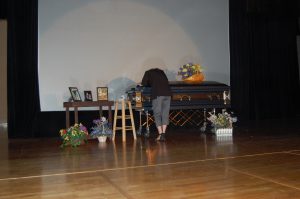 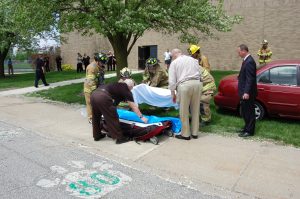 Check out next week’s edition of The Bremen Enquirer for a more in-depth look at the statistics behind accidents involving distracted drivers, especially teens, featuring an interview with Officer Troy Ulch of the Bremen Police Department. 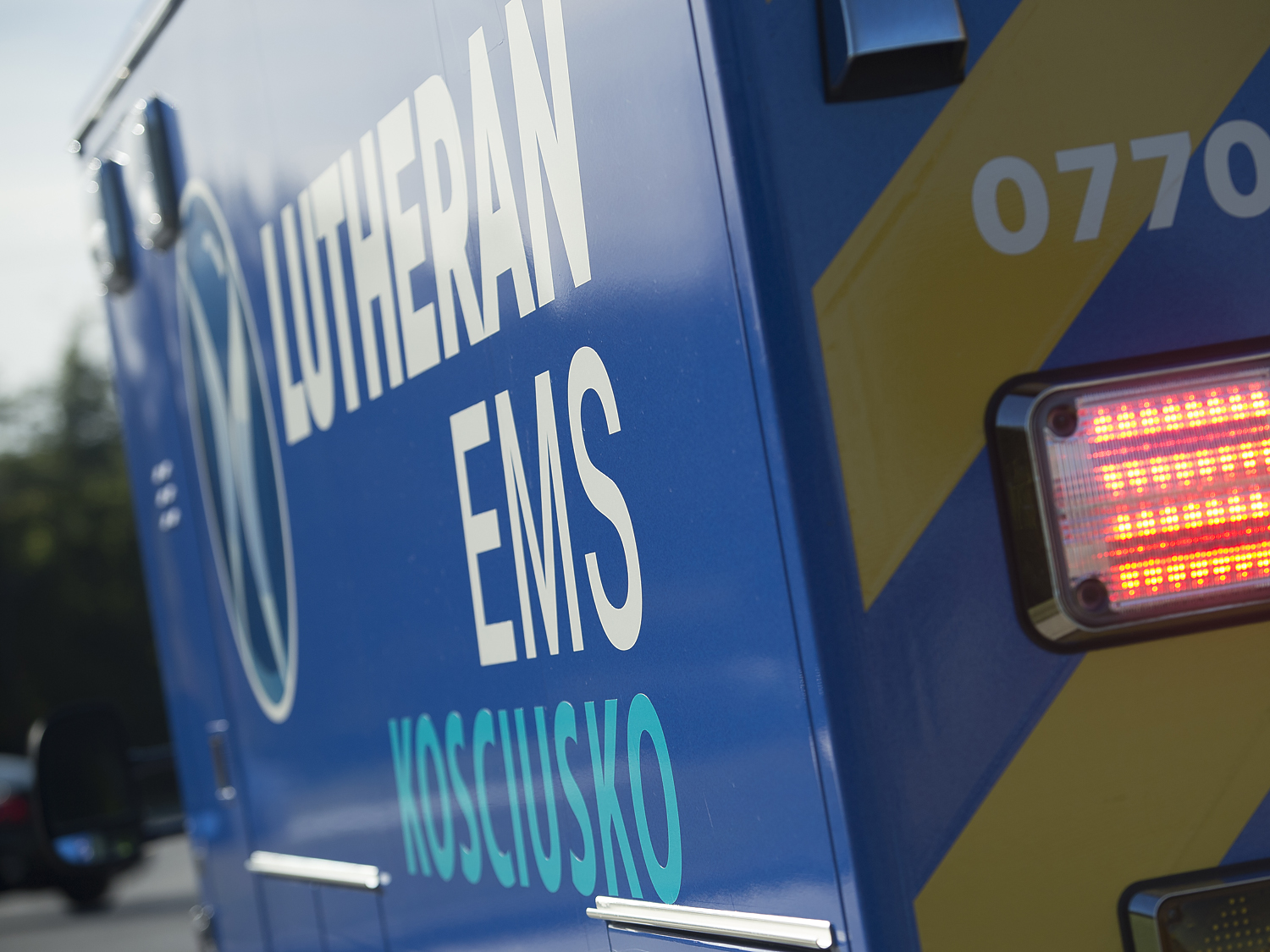